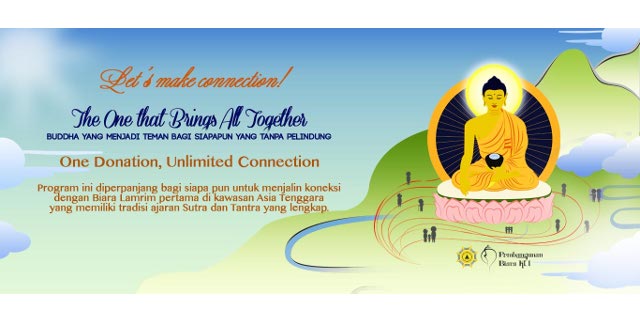 Who is the One that Can Bring All Together? (Make Connection with Indonesia Gaden Syeydrub Nampar Gyelwei Ling)

Like a tiny bird yearning to follow the path
Traveled by the mighty garuda
In whom the art of flight is perfected,
I long to enter that great highway
On which you have travelled to the realm of the ten powers,

But my mind’s eye is of sight too weak
To see the reality of phenomena.
I am impoverished, moreover,
By the lack of bodhi mind and true renunciation,
Persecuted constantly by enemy-like delusions of mind,
Cast headlong into the pit of grasping to self.

Were I abandoned by you in such a wretched state,
What other guardian who gazes on the pitiful
With such tremendous love could I turn to for refuge?

When this realm, sullied by the five remains,
Was ignored by others but adopted by you,
What purpose would the buddhas and bodhisattvas have
For praising and likening you to a white lotus?

–Praise of the Buddha, The Unrivaled Lion of the Shakyas, “The Splendor of an Autumn Moon”, The Devotional Verse of Tsongkhapa, translated and introduced by Gavin Kilty

Appreciating the Excellence of the Buddha

Appreciating excellence means that one takes refuge within the sphere of knowing the extraordinary qualities of the Buddhas.

The excellence of the Buddhas is discussed in terms of the wondrous nature of their body, speech, mind and enlightened activity.

The extraordinary nature of the physical manifestations of the enlightened beings is described in A Tapestry of Verse,

The physical manifestations of an enlightened being
Are delightful to behold, and are healing to the eye,
Like a beautiful constellation of stars
Radiant in a cloudless autumn sky.

The speech of an enlightened being is such that the things he says are heard by different listeners in direct response to the spiritual question that they have on their minds at the time.

It is said that if all sentient beings were simultaneously to ask a question of an enlightened being he would comprehend all those inquiries in a single moment; and although only one answer would be given, all the various beings would hear it in their own language in a manner that seemed to directly address their personal, individual concerns.

The Chapter of the Truthful One states,

Should all the sentient beings that exist
Simultaneously ask pointed questions,
A buddha would understand them all
In a single moment of thought
And answer all with one melodious reply.

It is said that a buddha directly knows all objects of knowledge as clearly as a piece of transparent fruit held in the palm of the hand.

The wisdom of only a fully enlightened being
Pervades all objects of knowledge.
For beings on lower spiritual stages
This wisdom still remains to be known.

All of the unenlightened sentient beings
Without exception are bound in delusion.
But a buddha has long been supported by compassion
And by the thought to liberate beings from delusion.

Thus should I first pay homage to the buddhas?
Or should it be directed at the great compassion
That inspires them to remain in samsara
And to work tirelessly to liberate living beings?

As for the enlightened activity of a fully accomplished buddha, it is said that the magical feats of his/her body, speech, and mind arise spontaneously and in an unbroken stream in order to benefit the sentient beings of the world.

From the side of the sentient beings, they are in need of guidance and assistance. As for the buddhas, there is no perfection with which they are not endowed, and there are no living beings in a state of imperfection so low that the buddhas cannot bring them guidance.

In brief, the buddhas do everything possible to bring goodness, enlightenment and joy into the world, and to eliminate negativity, ignorance and suffering from within the mind streams of the living beings.

Kadam Choeling Indonesia and the Indonesia Gaden Syeydrub Nampar Gyelwei Ling construction project would like to invite open donation for the main Buddha statue for the first Lamrim Monastery in the Southeast Asia region.

The Buddha donation program is set at the fixed rate of IDR 10,008 with the requisite that one person can donate for one time only. This donation program is designed spesifically for as many people as possible can participate and make the virtuous connection with the Buddha.

This program was first launched on December 2015 and until May 2016, the committee has collected around 3,000 names. 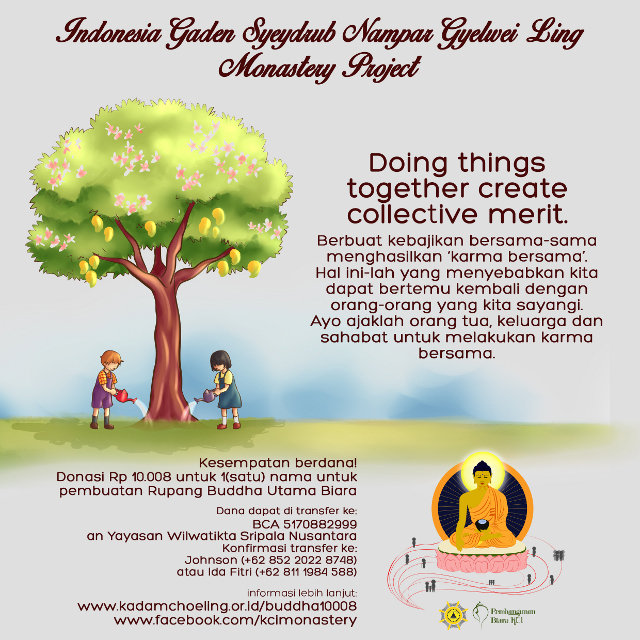 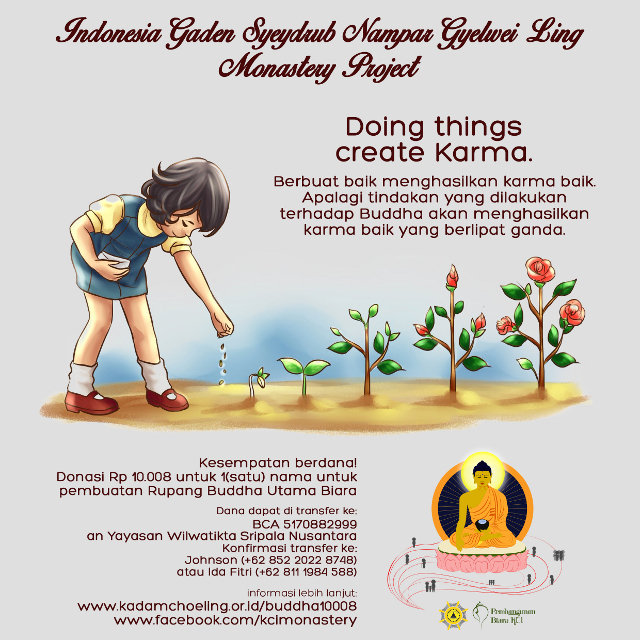