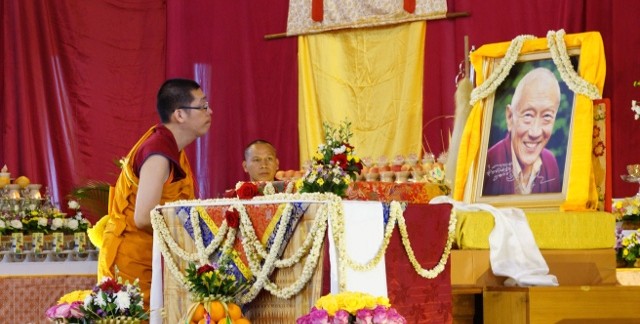 The KADAM CHOELING in Indonesia has recently received a very good news that Venerable Dagpo Lama Rinpoche—the great Suwarnadwipa Guru—will give the annual 2016 Lamrim Retreat and Teaching, after recovering from the heart issue which occured in mid October 2015. Even better, Rinpoche is already scheduled to give the first teaching in the new year of 2016 in January 16th—a week from now. It is a good news we all truly rejoice for, that the great Tibetan guru—Lama of Our Hearts—will continue to teach, passing on his great genuine realizations of the Dharma.

In the recent year-end event, for a series of 8-day-program dated 23rd until 31st of December, 2015, the Kadam Choeling Indonesia, along with some 337 listed participants, have completed the Liang Huang Bao Chan ritual (24-28 December), 16 Arhats Puja (29 December) and Tara Puja (30th December). At the closing in 31st December, the assembly performed the Southern Lineage Six Preliminary Practice (Lhogyu Jorchoe) along with guided bodhicitta meditation by Ven. Bhadra Ruci.

At the opening night on December 23rd in Vila Istana Bunga, Lembang, Bandung—the resort area of Northern Bandung which has hosted three Lamrim Retreat and Transmission (during the course of 2011, 2012, and 2014), Ven. Bhadra Ruci explained that Mahapranidhana Puja is transliterated from the Tibetan “Monlam Chenmo”, a great prayer festival originated by Je Rinpoche in Tibet. During this great festival, everybody participates in meritorious activities such as puja, debate, and extensive butter lamp offerings.

Originally the Mahapranidhana Puja is schedule for the year 2016, but since His Eminence Dagpo Rinpoche has to revise the December 2015 schedule due to his heart issue, Ven. Bhadra Ruci took the initiative to exchange the 2015 Southeast Asia Lamrim Festival into Mahapranidhana Puja 2—Pray for Rinpoche. Adjusting the difficult situation for the dedicated participants register for the program, Ven. Bhadra Ruci combined the two tradition, Chinese Mahayana of Liang Huang Bao Chan, a purification ritual set up by the Chinese emperor Liang Wu Di, with the Tibetan tradition of the 16 Arhats Puja and Tara Puja.

With full grace, the biksunis sang the chinese scripture written by the Chinese Monk Bao Zi, containing teachings of the Dharma and names of the Buddhas. The rituals are divided into two kinds of activities, recitation and prostration. The content recitation is done with the traditional venerating position of kneeling (lit. on the two knees), while the prostration is done while singing out loud the names of the Buddhas.

Most of the participants joined the recitation and prostration with great joy. The prayer is done in melodious rhythm of the chinese style recitation, and the prostrations faithfully directed to the Merit Field, the Buddha. Ven. Bhadra Ruci exercised great effort in explaining the motivation and the way to do the ritual properly. The main stage is decorated with large thangka of Buddha Sakyamuni in the middle, accompanied by thangkas of Lord Atisha on His right, and Je Rinpoche’s on His left side. Under the Buddha is the photos of Lineage Masters, i.e. the late Kyabje Dechen Nyingpo of Pabongka Rinpoche, Senior Tutor of the 14th Dalai Lama Kyabje Trijang Rinpoche, Junior Tutor Kyabje Ling Rinpoche. Under the photos are beautifully decorated standard Tibetan traditional offerings, arranged with the fusion of Indonesian rich cultural heritage, such as the balinese stacked fruit offerings.

In the middle of the stage, the usual teaching throne is erected to symbolize Rinpoche’s presence, represented by the elegant framed picture usually placed at the Center, on top of Je Rinpoche’s altar. Below the stage, right in front of the throne, is the Liang Huang Bao Chan altar, arranged in the traditional chinese way, with chinese mahayana musical prayer instruments. On this particular altar, the offerings are presented in chinese style, with the main prayer dedication directed to Rinpoche’s name, Lobsang Jampel Jampa Gyatso.

During the course of the 8-day-program, every evening Ven. Bhadra Ruci conveyed the teaching on the Jataka Mala—the Buddha’s past lives as great beings en route to enlightenment by practicing the paramitas or perfections of a Bodhisattva’s conducts. Ven. Bhadra Ruci repeteadly reminds the participants that the Jataka Mala is indeed a great literature containing the highest values of great morality.

The Jataka Mala tells about the spiritual bond between Buddha and Ananda when the two were born as golden geese. One day the two geese were caught in a trap and the Buddha insisted his friend to leave, but the friend replied, “Dharma teaches that one should not leave his friend while in difficulty, even if he has to sacrifice his own life.” It tells about the practice of generosity (dana) when the Buddha was born a a white elephant, who offers his own flesh to save the lives of 700 humans.

Jataka Mala also tells the practice of moral conduct between two of the best of friends, a king and his chief military commander, who respect each other’s commitment and not swayed by the most beautiful woman, Ummadayanti—she who drives craziness. The panglima, Ahiparaka, offers his beautiful wife to the king, who turns down the offer and overcome his own desire, and eventually lead the kingdom in peace.

Ven. Bhadra Ruci greatly suggests the Jataka Mala to be studied and practiced. This great literature is carved on the walls of the Borobudur—the world’s greatest Buddhist mandala built in Central Java. However, nowadays the Borobudur has become a dead monument with not even a single person live in the surrounding area who understand the history and values of the Jataka Mala. This literature serves a perfect purpose for parents to read to their children.

On the last session of Liang Huang Bao Chan ritual, which fell on December 28th, Ven. Bhadra Ruci spesifically gave advice that the sessions—apart from the main dedication for Rinpoche, will also be dedicated for the Indonesian president, Jokowi, so that the President will have the merits needed to lead the country.

For the next two days, 29 and 30 December, the program is switched to the Tibetan puja of the 16 Arhats and Tara. For the Tibetan tradition, the puja were led by Kadam Choeling Indonesia monastic biksus, with the chanting master (Umze) Ven. Tenzin Chograb. Currently the complete assembly of KCI monastic Sangha consists of 10 fully ordained biksus and 5 samaneris, led by Abbot Ven. Bhadra Ruci.

During the Mahapranidhana Puja 2, there were 2 sessions of presentation by the committee of the Indonesia Gaden Syeydrub Ling Monastery monastery construction. The session showed the video of the Dhammacakkapavattana—The First Turning of the Dharma Wheel event by Ven. Dagpo Rinpoche on the location of the monastery on January 10th, 2015. The committee—led by Head of Committee, Rudyanto, presented the latest update on the construction progress. Ven. Bhadra Ruci took the opportunity to share the Master Plan of the Monastery project.

On the last day of the program, coincide with the last day of 2015, the assembly of monastic Sangha and lay people practitioner conducted the Southern Lineage Six Preliminary Practices (Lhogyu Jorchoe). In order to maintain the tradition of Bodhicitta Ritual usually given by HE Dagpo Rinpoche, Ven. Bhadra Ruci gave the guided meditational points on the Lamrim in order to generate the precious spirit of enlightenment. The entire program was then dedicated for the full recovery and long life of His Eminence Dagpo Lama Rinpoche—The Incomparable Dharma Sun, The Eye for us to see the truth, please live long! 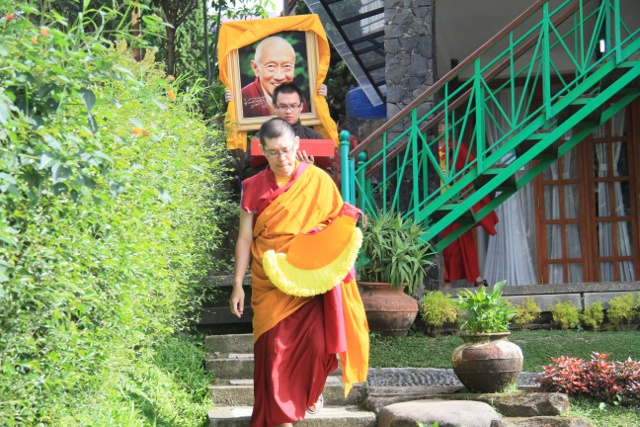 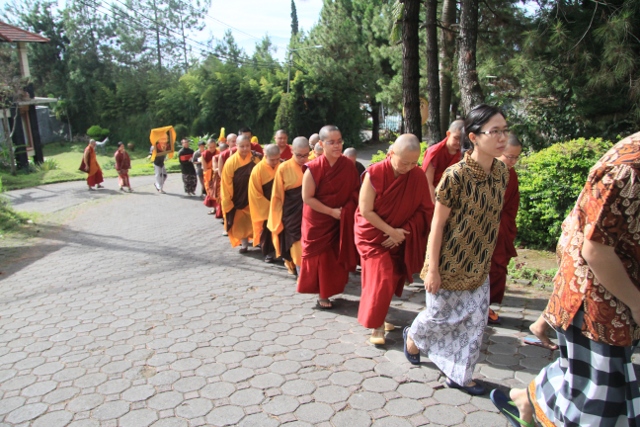 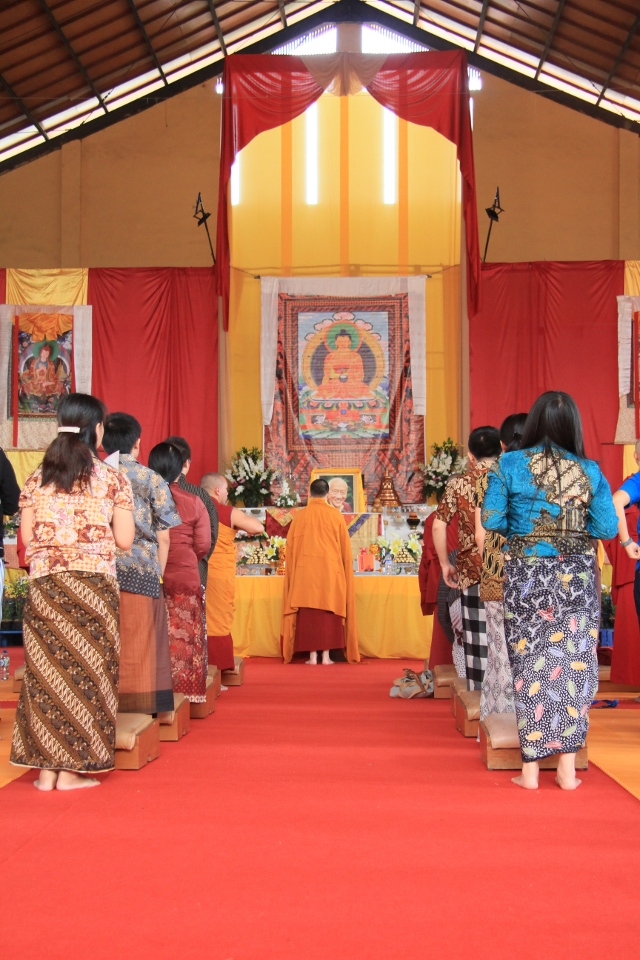 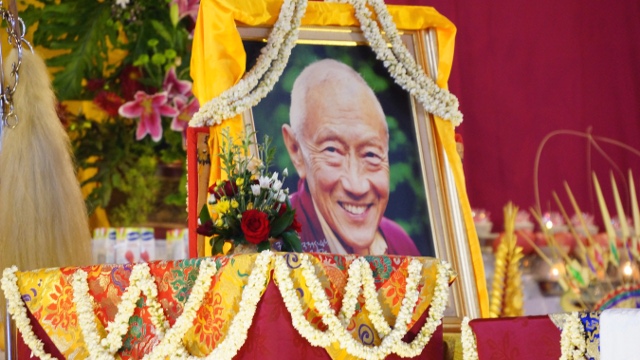 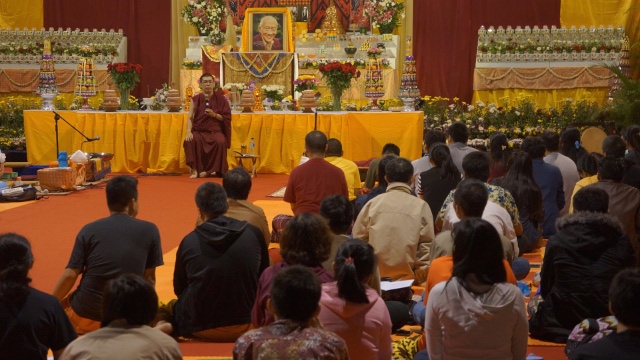 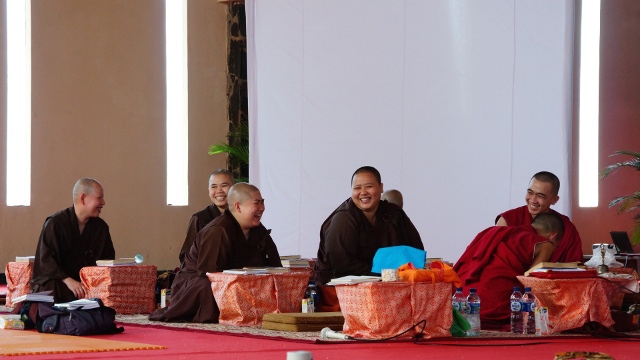 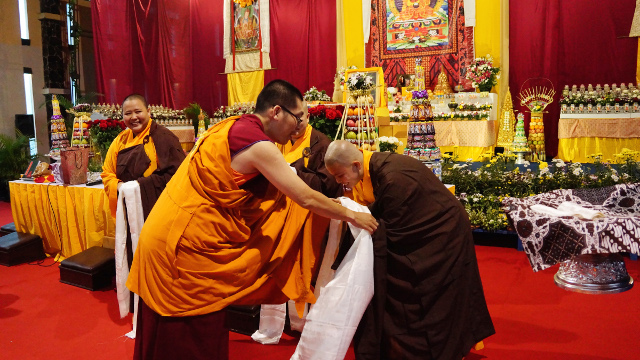 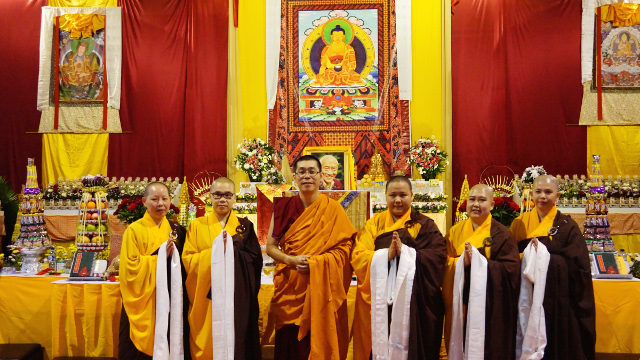 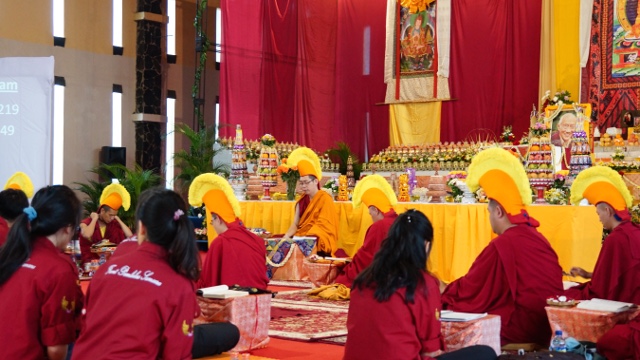